In which I try to develop a green thumb

It's been a while. Stuff happened, and didn't.

Winter's coming on here, quite quickly. Amongst other things, this means that there are giant drifts of leaves everywhere to jump in, and dead looking trees.

Last winter, one of the things that contributed to me feeling quite lowly was the lack of greenery in my life. London is excessively urban in that way - I have to walk about 10min to get to some grass, for instance. So, to combat this issue, I'm growing my own green. 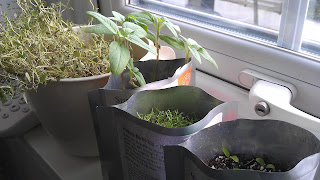 My window sill has lots of stuff on it. Currently, Thyme (which usually lives in the kitchen but needs a bit of sun once in a while), Sunflowers (no flowers yet), Poppies, and Gerbras.  It's fun watching them grow, and also fun trying to figure out when and if to water them. I also tried to grow basil, but ... well, I'm trying again soon. Possibly with more success. And in the meantime, I have spare soil to grow other seeds in!

The flowers came with instructions, in those handy dandy pouch thingies that are their current homes. It's so exciting watching the successful seeds germinate, and actually seeing the plants change day to day. It's less exciting cleaning up dropped petals. I'm currently agonising over thinning out the sprouting gerbras, poppies, and baby sunflowers - I want all the flowers! But they do look a bit crowded in there.

The pouches look a little silly, and I strongly suspect they're going to be unstable when the plants get bigger. The pouches don't drain, and poking around germinating root systems is generally a bad idea, so I'm doing a lot of guessing with the watering. I strongly suspect that overwatering is why my basil seeds didn't germinate. That's a new one for me - generally I've killed plants by not watering them. I was trying to follow the "DO NOT OVER WATER" warning on the label, obviously without success.

The thyme came in a pot, and it's also currently living in a measuring jug, that being the handiest container nearby when I wanted a drip tray and crude self watering system. It timeshares (see what I did there?) with another plant in the kitchen that is stubbornly refusing to reflower. Time for pots and potting mix, definitely. And drip trays.


Also, the dearly beloved brought home something beautiful for me: 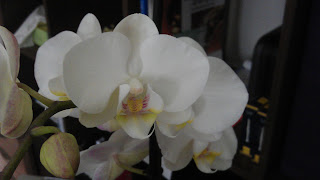 Gorgeous, innit? It very helpfully came with no instructions or identification at all. However, some time on the internet has told me it is probably a Phalaenopsis aka Moth orchid. Some more time on the internet has told me I should water and fertilize it once a week or thereabouts, keep it on my desk (with jaunts behind my PC to get a breeze now and again), and mostly ignore it except to admire it and take photographs. I might need to get a better pot than a repurposed plastic box, though.

It's good to have fresh herbs always there - and at 1p extra to buy a pot instead of some cut herbs, pretty economical after about a week. In Brisbane I had to keep something alive rather longer to break even, if I recall correctly - especially since given climatic conditions, I had to repot the thing straight away. And water daily because of said climate so keeping them alive was a real struggle. Which was fun when there were water restrictions.

I'm hoping to grow some rosemary, mint, coriander and sage (as well as the basil, again). I have a powerade bottle that makes a pretty good indoor watering tin, currently resident on my desk with filtered water in it (so it's at the same temperature as the plants, the water from the tap is icy and filled with chlorine and dissolved solids). I may have to acquire some fertilizer for both the herbs and the orchid. And another powerade bottle for distribution of fertilizer. I'm hoping to get out of the house tomorrow and go for a brisk walk to the nearest nursery to acquire the required substances.

I sincerely hope they all survive when I next go on a long trip, but maybe my landlady will be okay with plantsitting them. I'll have to ask the next time I see her.

So, here's to my new hobby of keeping plants alive.
Posted by ysabet at 19:40