Today's first attempt at one of these ended up being a blog post about exercise. I got sidetracked. For the second day in a row.

So anyway, today I wrote a blog post, linked above. I also did some housework, although not as much as usual, because my right shoulder has a crazypainful spasm. I blame Deckard Cain.

I googled a recipe for paleo meatballs, to try and make some snack-sized meatballs I can freeze. I would normally not bother with my shoulder the way it is, but the meat was defrosted a couple of days ago, and I'd feel guilty about throwing it out. 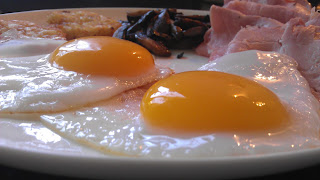 Oh, and I made myself breakfast. Mushrooms, rosti, lean ham and two duck's eggs. Duck eggs taste ... not quite the same as hen's eggs. I think I'll scramble them with garlic or something next, as they were just a little peculiar for my tastes just fried. I will admit, though, they looked gorgeous. Om nom nom. Overall, as far as my dietary requirements go, it was a pretty good breakfast. 470 calories, 15g carbohydrate, 27g fat, and 42g protein. Maybe a little high on the fat side, but certainly okay otherwise. It probably seems a little high in calorie count, until you take into account that I don't snack, probably won't eat again until 4pm, and then it'll be something fairly light, leaving me about the same calories for dinner. Today I'll probably go over on fat, under on carbohydrate, and hit my protein goal. A detailed analysis of my food requirements will probably get a post of its own, sometime, but not right now. In any case, I'm satisfied that I tried something new today.

So, the shoulder spasm has put paid to plans for a workout this evening, which is somewhat annoying, but these things happen. On the bright side, it means I'll get dinner at around 8pm instead of around 10pm, which is a definite plus.

Still to do: clean out the fridge of perishables in preparation for next week's trip to Seattle, since it's bin day tomorrow.